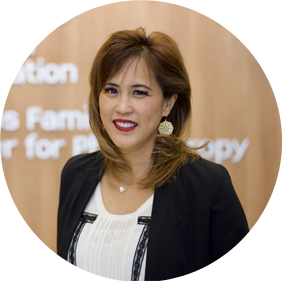 Christina Ogawa always tells her second grade classes that through determination and grit, there is nothing they can’t achieve. She would know. The same year she shattered her ankle playing tennis, she also received a call from Lincoln M. Snyder, M.D., that her routine mammogram showed some abnormalities. Follow-up testing confirmed the fear that Christina had lived with since she was 16 years old, when she started developing fibroid lumps in her breasts. Her worry had intensified when her cousin died of breast cancer in her mid-twenties.

Dr. Snyder confirmed that the unhealthy cells were cancer but, thankfully, they hadn’t spread to Christina’s lymph nodes. He told her that it might be time for her to consider a bilateral mastectomy. He referred her to Nirav Savalia, M.D., director of Oncoplastic and Aesthetic Breast Surgery at Hoag.

In her early 40s at the time of her diagnosis, Christina did not hesitate. She agreed to the procedure, knowing it would save her life. “I wanted to be around for my kids and my husband,” she says. “And my students, whom I love and care for as if they were my own.”

When she met Dr. Savalia, she instantly felt safe. “He was calm and gentle, but he told me honestly what they were going to do so that I would look as natural as possible,” she recalls. “I immediately trusted him. I wasn’t scared because I knew I was going to be okay.”

On December 5, 2010, she had breast reconstruction after mastectomies. She then followed up with routine visits for injections until Dr. Savalia removed the expanders. In February 2011, only two months after the surgery, Christina returned to teaching.

She will be the first to admit that her reconstruction journey was arduous and, at times, seemingly impossible. But Dr. Savalia and his team were always available when her emotions became overwhelming.

“I called him on the weekend, balling my eyes out,” she says. “He reassured me that I was recovering and that what I felt was normal. He then asked me to put my husband on the phone.”

After her husband hung up the phone, he said, “I’m sorry. I’m here for you.”

Christina now laughs about how Dr. Savalia explained the level of pain she was in to her husband and admonished him to be more supportive. “He made sure that every aspect of my journey was taken care of,” she says of Dr. Savalia.

For the first time in her life, Christina was free from the fear of breast cancer. “I now have less than 1% chance of getting breast cancer,” she says. She regularly talks with Dr. Savalia’s patients who are facing the same decision she had to make seven years ago.

With a new lease on life, Christina went back to the tennis court and joined a team. In 2012, she went on to win the USA Tennis Association nationals. Since then, she traveled to Rwanda to share her story of survivorship and faith and ran the Race for the Cure. But what gives her the most satisfaction is the example she set for her teenaged daughter to be proactive and vigilant in her health.

“I’m not done yet,” she asserts. “I want to give back and be an advocate for women to make their health a priority.”