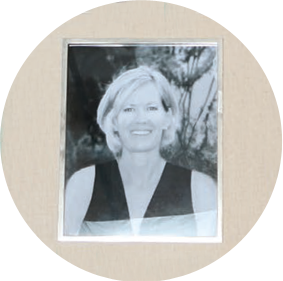 She Had Such Grace

For the Noebel family of Irvine, the final precious weeks, days and moments of Jane Noebel’s life were an extraordinary lesson. They were a lesson about quiet dignity and inner personal strength, reflected in Jane’s resolve to embrace and celebrate life fully to the end. And they were a lesson about the lasting impact of compassionately delivered palliative care.

Four months earlier, in late November 2013, Jane, a vibrant 54-year-old mother of identical twin daughters Annie and Sara, 25, and son Charlie, 19, had been hospitalized with persistent severe stomach and back pain. After extended hospital stays and tests – first at Hoag, then at Keck School of Medicine of USC, Jane underwent exploratory surgery that revealed a large tumor in her abdomen determined to be Stage IV gastric cancer.

The devastating and completely unexpected diagnosis blindsided Jane’s husband, Barry, and her children. Honoring Jane’s wishes to be near family and friends in Orange County, in early February 2014 she was transferred to Hoag put under the care of Hoag CARES, palliative care program directed by Dr. Vincent Nguyen, D.O., C.M.D.

“In the three weeks she was at Hoag, the Hoag CARES staff gave her more life than she had in the entire two months before,” says Annie. “They helped her live life to the fullest and they made her feel like her life was worth living until the very end.”

The family grew so close to Dr. Nguyen that he and Annie’s father, Barry, still keep in touch. Annie shares, “Our experience with Hoag’s palliative care team was one that we’ll never forget, one we couldn’t forget if we tried.”