A tough upbringing softened her heart for others in need 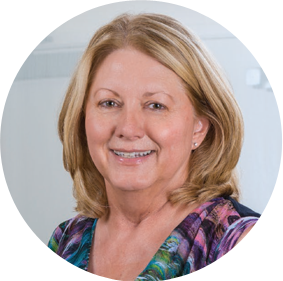 Day in and day out, Laura Boucher’s patients relate highly personal, often heart-wrenching stories. The 55-year-old Boucher, who works as a psychological counselor at Hoag’s Mental Health Center, listens—and to the surprise of many of her patients, relates to them on a deeply personal level.

Indeed, her patients soon realize that the Master of Social Work intern, who gently coaxes the hurt, pain and confusion out of them, understands what they are going through more than they could have possibly imagined.

“They come in viewing you as, ‘You’ve got it all going on,’ but as you share just enough of yourself to humanize yourself, it begins to give them hope.” And hope is the foundation on which the Mental Health Center at Hoag stands.

Funded by Hoag’s Community Benefit Program, the Mental Health Center has provided outpatient mental health services to low-income and underserved patients since 1998. Bilingual staff and therapists see 1,700 patients per year; they provide individual, family, couple or group counseling, depending on a person’s need.

The center never turns anyone away due to lack of funds, and instead offers a sliding fee scale for uninsured, underinsured and low-income patients.

“It is the only program that I know of in the nation that is fully funded by community benefit dollars. It’s amazing,” says Michaell Rose, LCSW, director of Community Health Programs, who created and oversees Hoag’s Mental Health Center.

All of the center’s staff started as interns from master’s or bachelor’s level programs. The center currently accepts both graduate and undergraduate interns from USC, Cal State Long Beach, Cal State Fullerton and UCLA. The graduate social work interns typically work about 20 hours a week counseling patients under the staff’s mentoring and professional license. Boucher says she considers herself lucky to be one of them.

The youngest of eight children raised by a single mom in a sketchy Los Angeles neighborhood, Boucher was the first in her family to go to college—at the age of 38. Moving around the country with her Naval psychologist husband meant schooling happened sporadically for the former florist and mother of two. By the time she complete her undergraduate degree, she was 53 and a grandmother.

A mentor encouraged her to follow her dream of earning an advanced degree, which required her to apply for hospital internships. Boucher has had five other internships, but says her service at Hoag stands out due to the support and encouragement she received from the more seasoned staff and the opportunity to grow and meet her full potential.

“It has been rewarding to put into practice what I’ve been learning,” Boucher says. “I was talking with a client this morning who said had he not been able to be here, he doesn’t know what he would have done.”