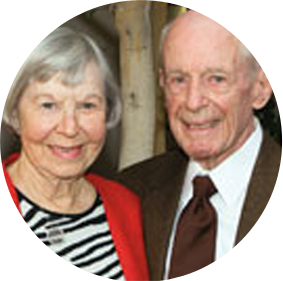 Maggie Murdy Lusk was a true trailblazer. Unlike most women of her era, she focused her energies on exciting pursuits that provided the means for an incredible and fulfilling life. Through her generous spirit and philanthropy, she touched countless people and organizations, including Hoag Heart and Vascular Institute.

At a time when very few young woman attended college, Margaret (Maggie) Roberts earned a degree in business at Oregon State University. However, as unique as her degree was for a young woman in the 1940s, her aspirations reached far beyond earning a degree.

Inspired by her first employer to invest a bit of each paycheck in the stock market, Maggie studied investments in depth and decided to pursue a career in the field. She interviewed for a sales position with a brokerage firm, but was rejected solely because she was a woman. Maggie was way ahead of her time.

Undaunted, she broadened her knowledge of the stock market and continued to increase her investments. Armed with her investment income and independent spirit, she remained single into her late 40s. She traveled extensively and maintained an active social life centered around her close friends and organizations that she supported.

She felt an individual responsibility to carry her own weight, and – perhaps inspired by her Presbyterian upbringing – she believed it was her duty to provide for the humanitarian organizations that were important to her. Her philanthropic interests ran the gamut, from education to the arts.

At 38, Maggie suffered a heart attack, spent two months in the hospital, and became acutely aware of the importance of health care services. Her health care philanthropy became more focused when, in 1972, she married Don Murdy, whose brother had been instrumental in the founding of Hoag Hospital.

The Murdys made their home in Laguna Beach where they were very close friends with their neighbors, the Lusks. After many years, Mr. Murdy passed away; then Dick Lusk lost his wife. Having suffered similar losses, Maggie and Dick formed a close bond. Their friendship grew as the years progressed, and ultimately they married.

“For many years, the four of us had had many happy times together, and now the two survivors on earth were enjoying life here while we knew that there was joy and laughter going on above us,” Maggie later wrote.

Maggie and Dick filled their years together sharing a special love of travel. Between trips, Maggie received treatment for her ongoing heart problems and participated in the cardiac rehabilitation program at Hoag Heart and Vascular Institute.

“She had a special place in her heart for Hoag Hospital,” recalls Mr. Lusk. “They treated her well, and the Hoag family was a very dear part of her life.”

In the weeks leading up to her passing, Maggie wrote an autobiography. It is the story of a life filled with the joy of independence, the meaning of love and friendship, the impact of heartfelt generosity, and the peace of an unshakable faith.

“When I look back upon my life,” she wrote, “I smile and am so content…. I’ve had a wonderful life, and now the very best of all.”

Maggie had spent many hours in the cardiac rehabilitation center gym and through her estate designated a $1 million gift for this service at Hoag. In recognition of this gift, the gym will be named in her honor.

“During the course of several meetings, Maggie expressed her delight with Hoag and the staff of the Heart and Vascular Institute,” explained Ron Guziak, Hoag Hospital Foundation executive director. “She believed her life was enhanced and extended because of her care, and her gift is a tribute to the dedicated staff and physicians who cared for her. She was a very special friend of Hoag and many organizations in Orange County.”

In her memory, the hospital will name the cardiac rehabilitation center “Maggie’s Gym.”