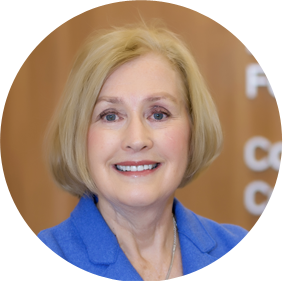 Inger Farwick remembers feeling unusually tired and a little off on October 17, 2017.  At the time, she chalked it up to having a bad day. Aside from high blood pressure and high cholesterol, which she managed under the care of her cardiologist, Inger considered herself healthy. The following morning, after a normal phone conversation with her daughter, Inger’s life took a dangerous and unexpected turn.

“I immediately fell to the floor and couldn’t move. I felt like my muscles weren’t working so I couldn’t get up and walk or talk,” explains Inger. She recalls having her phone in her hand but not knowing what to do with it.  Remarkably, she was able to tap the name of her neighbor. Once the call connected, Inger’s neighbor noticed something wasn’t right and called an ambulance.

Care That Saved Her Life

The moment Inger arrived at Hoag’s Emergency Department there was a team of doctors and nurses waiting for her.  A CT scan showed a blood clot from her heart had lodged in a vessel in her brain and was causing a stroke.

Inger was then injected with an intravenous clot-busting medication, called tPA, which is commonly used to treat stroke patients. The team of doctors noticed the symptoms weren’t getting better, however, they were getting worse. Hoag neurologist, Dr. Andrew Ly, and Neuro-Interventional Radiologist, Dr. Fabio Settecase, agreed at this point she was a candidate for a clot removal procedure, called a Mechanical Thrombectomy.

Mechanical Thrombectomy involves threading a catheter into the femoral artery in the groin and up through to the head until it reaches the brain artery that contains the blood clot causing the stroke. Using x-ray guided imaging, a small and expandable stent device, called a stent-retriever is inserted across the clot, and after it engages the clot it is pulled back, removing the clot, and restoring blood flow.

Quick removal of blood clots from the brain leads to better outcomes for stroke patients. “If we had not removed the clot, a significant part of Inger’s brain would have suffered permanent damage. She would have had a significant disability and would have likely been dependent on other people for the rest of her days,” explains Dr. Settecase, who performed the Mechanical Thrombectomy. This tremendously effective therapy is only available at a handful of hospitals in Orange County, with a limited number of physicians trained to perform it.

Within hours after a successful minimally invasive procedure Inger started to speak, could recall where she was and began to identify objects that were put in front of her by nurses in the ICU. Her speech and recollection continued to improve.

Dr. Settecase calls Inger’s recovery remarkable: “I walked into her room in the ICU to see how she was doing twelve hours after her surgery and she was able to carry on a conversation as if she hadn’t been in the emergency department with a stroke just hours before. It takes an entire team working together to deliver this type of care. Thanks to expert physicians, nursing staff and philanthropy, Hoag is a leader and innovator in this treatment. As a result, Inger was able to get the right care, quickly, efficaciously and had a spectacular outcome.”

After just five days in the hospital, Inger was well enough to be discharged back home and at her one-month check-up Dr. Ly told her she could resume all of her normal activities.

“I know it would have been a different outcome if I was at another hospital,” shares Inger. “We are all lucky to live in this community and know that Hoag is always there for you. I’m grateful that Hoag continues to advance its quality of care because of the tremendous physicians, and support from the community.”

As for her current day-to-day life, Inger doesn’t take any moments for granted. She continues to work out several times a week, enjoys spending time with her five (soon to be six) grandchildren, and is happy to get back to her passion for international travel (up next on her list is Dubai).

Inger feels blessed to have had such wonderful results. “Each day I appreciate my wonderful family, my two daughters, my grandchildren, and Hoag.” She smiles as she declares happily, “Hoag has been my home for 42 years.”