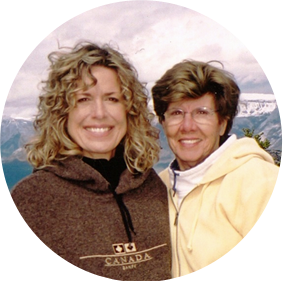 Honoring a Woman Ahead of Her Time

A Moment of Grace

In 2014, Trudy Finn met Kevin, the man of her dreams, and was welcomed into his large, loving family. She moved to Newport Beach, California, from her home in Tennessee. After a career in magazine publication and communications, Trudy had embarked on a new chapter in her life as a children’s book author and wife. But after a routine mammogram, she was diagnosed with breast cancer.

Kevin and Trudy reached out to experts through a family member. As soon as Hoag was mentioned, their contact at Sloan Kettering said, “You couldn’t be in better hands.”

The oncologist they spoke to at Sloan Kettering had recently attended a conference where Melvin J. Silverstein, M.D., F.A.C.S., the Gross Family Foundation Endowed Chair in Oncoplastic Breast Surgery and Medical Director of Hoag Breast Center, had presented.

When Trudy and Kevin sat down with Dr. Silverstein, he recommended a procedure called IORT (Intraoperative Radiation Therapy), a technique that delivers a concentrated dose of radiation to a cancer tumor site during surgery once the tumor is removed. Hoag was the first hospital in Orange County to offer IORT as a complete replacement for traditional radiation therapy.

In the course of her treatment, Trudy found out that Leona, who passed away in 2015, worked in the same circle of researchers and doctors as Dr. Silverstein.

Like Dr. Silverstein, Leona established a legacy that saves lives.

Trudy remembers her mom as a devoted wife and mother. But she was also a determined student.

Leona completed a double master’s degree with honors and went to work as a scientist and cancer researcher. She focused on developing a vaccine to combat tumors. After Leona’s passing, Trudy was astonished to find her mother had published numerous research papers and held a patent for cancer therapy.

“Fifty years ago, she believed that our bodies can cure cancer,” Trudy says. “And it has now come to pass.”

A MOMENT OF GRACE

With deep gratitude and in honor of her mother’s work and connection to Dr. Silverstein, Trudy made a gift from Leona’s estate to Hoag.

Today, four years after her cancer journey and Leona’s passing, Trudy remains cancer free. She attended a presentation by Dr. Silverstein to nurses at Hoag where he shared his recently published study on the findings from his breast cancer treatment research. When she realized she was one of more than 1,000 women with early-stage breast cancer who received IORT, she had a moment of grace.

“I got tearful because I had no idea how lucky I was to be at Hoag where Dr. Silverstein was conducting this treatment research,” she says. “He saved my life.”

Thanks to him and his team, Trudy is surrounded by her loving family of adult children and grandchildren. In fact, as of July 2019, the family welcomed their newest Hoag alumni!

“I count my blessings,” she says.

For more information on making a gift to Hoag’s Women’s Health Institute, please contact Tina Minh, director of development, at (949) 764-7279 or Tina.Minh@hoag.org.