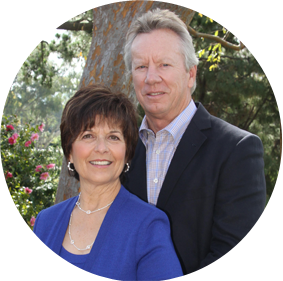 David Steffy and his wife Diane

Throughout his long and successful career, David Steffy has focused on one thing: hospitals. He has visited hundreds, owned many, and knows a great medical enterprise when he sees it. His wife, Diane, was a successful orthopedic nurse in her own right. As such, she recognizes a nursing program she can get excited about.

With their strong healthcare backgrounds, it's a great compliment that the Newport Beach couple has provided a generous gift to support orthopedic research and nursing scholarships at Hoag. Living only a short distance from Hoag Hospital Newport Beach, where both have received excellent care, the two felt called to give.

"I get a feeling about an organization when I first walk in," David says. "At Hoag, you quickly sense that it's a high-performance institution. It has great leadership, a wonderful medical staff, and the employees are performance oriented and compassionate - the feelings I get are all very positive."

David was reared in Columbus, OH, living down the street from legendary Ohio State University football coach Woody Hayes. He graduated from OSU, served as a medic in the Army, then returned to work in the OSU Medical Center administrative offices, eventually becoming director of hospital administration.

After working for a hospital ownership/management company in Nashville, TN, he helped start Republic Health in Dallas, TX, also a hospital ownership and management company, then Community Health Systems, which purchased hospitals outside of urban areas. He also helped establish hospice leader, Odyssey Healthcare and, more recently, Ascend Healthcare, which owns a chain of psychiatric hospitals.

Diane was raised in Brockway, PA, and attended the Indiana Hospital School of Nursing. After becoming an RN she moved to Columbus, becoming a nurse manager in the OSU Medical Center Orthopedic Department. She later worked as nurse coordinator for a renowned orthopedic surgeon, then became a nurse manager at Vanderbilt University and later at R.H. Dedman Memorial Medical Center near Dallas.

The couple met in 1976 while both lived in Columbus and were married in 1983, moving to Newport Beach the following year.

The Steffys literally discovered Hoag by accident, although David knew its reputation from his work with hospitals. He was struck by a bicycle while running on Super Bowl Sunday in 1985, suffering broken ribs and a punctured lung. Not only did the staff in the Emergency Department and throughout the hospital provide excellent care, but they went the extra mile.

"I had fairly serious injuries, but they got me to my room in time to see most of the game," he laughs. "They found out what was important to me, made sure it happened, and confirmed my suspicions that Hoag was special."

In 2010, Diane underwent hip replacement at Hoag. Like David, she received outstanding pre and post-operative care. "I've been very impressed with Hoag," she says. “The pre-op teaching program for total joint replacement patients, called JointWorks, was very informative and gave me the opportunity to ask questions and interact with others in similar circumstances.”

To show their gratitude and to help others, the Steffys designated their gift to fund two orthopedic research coordinator positions and at least two orthopedic nursing scholarships each year in perpetuity. Hoag has identified expanded hospital-based research overseen by research coordinators as essential to attracting top physicians, expanding treatment options and improving patient care. Positions funded by the Steffys will facilitate a wide range of research - including clinical trials - aimed at enhancing treatment and outcomes.

"Hoag is a world-class orthopedic institution, and we believe this will make it even better," says David. “Hoag has the highest proportion of elective admissions of any hospital I know of. People are choosing to go there."

In addition to Hoag, the Steffys have supported other healthcare programs. They are helping to establish a Center for Personalized Medicine at OSU, a genome-based program that will help patients optimize their health by identifying potential problems early, and support the Division of Pulmonary Medicine at UCLA, the National Hospice Foundation and others. Diane has volunteered with Odyssey.

Through it all, Hoag remains a high priority. "There are not many hospitals that have the culture of high performance that Hoag has," David says. "We want Hoag to be as good as it can be."