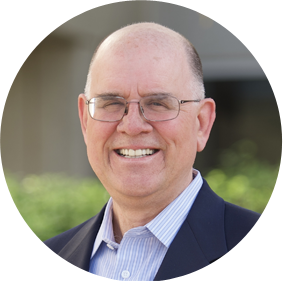 Jeff Hetschel worked in ministry all over the world. He and his wife Debbie, also a minister and now a family therapist, served in North Africa, the Middle East, Russia, China and Mexico. But when Jeff joined the Hoag Pastoral Care team four years ago, he realized that the world now comes to him as Chaplain at Hoag Irvine.

“Irvine is such an international place and at the heart of what I do; chaplains bring people together to care for each other,” he says.

As Hoag Irvine’s Lead Chaplain, Jeff oversees a dedicated team that includes the first female Muslim chaplain and Pastoral Care students who serve a diverse religious population, including Christians, Jews, Muslims, Buddhists and Hindus. Twenty-four seven, seven days a week, Jeff and his team are called to patient’s bedsides and to families in the waiting areas to help them through illness and spiritual crisis, regardless of their religion or language. “We provide a moment for them to collect their thoughts and find peace with God,” he says.

His office has served as an impromptu church, mosque and temple for families to pray in their unique tradition. “A Buddhist patient passed away and the family needed a space to perform the traditional chanting for their loved one,” he said. “They used my office for their own private temple.”

Without a dedicated chapel, Jeff has married Hoag staff in the garden and held a ten-minute Easter service for Hoag physicians, nurses and staff in the ambulance bay. But as Hoag Irvine has grown to serve the health care needs of its community, it also grows in the need for an ecumenical spiritual place.

During the Christmas 2017 season, he and his wife sat down and made the decision to make a founding gift to build the Hoag Hospital Irvine Chapel.

“We wanted to make a public statement that we’re ready, let’s get this started,” he says. “We’ve always given to people and we’re excited to help create a place where tears can fall, and prayers are given in thanks.”

Hoag Irvine is now working with architect Jennifer Cheng to create a chapel that can meet the needs of various faiths. With an updated Hoag Irvine Emergency Department and a proposed Mother-Baby Unit, Jeff sees the need growing each day.

Jeff and Debbie hope that their gift will inspire others to help create a truly special place for the Hoag Irvine community to find solace and strength.