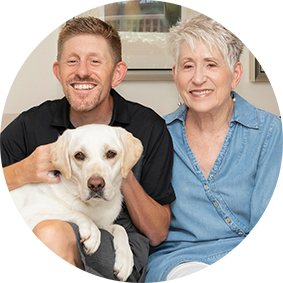 A Family’s Journey with Epilepsy Leads to Success at Hoag

From the time Mark Anderson was 14 years old, he has had debilitating epileptic seizures that attack with no warning. He loses all awareness and collapses, often injuring himself significantly in the process.

Now 46 years old, Mark’s epilepsy has taken his family on a challenging journey. Mark’s parents, Tom and Liz, have dedicated themselves to seeking out the latest treatments, trying new medications, technologies and procedures that could alleviate, lessen or at least warn Mark of an oncoming seizure. It’s taken decades of trial and error, but Mark is getting some peace of mind, and so is his family.

“We’ve had two blessings,” Tom said of his son’s journey. One of them is Dr. David Millett, director of Hoag’s Epilepsy Program. A renowned expert in the field, Dr. Millett had been working with the son of an Anderson family friend. When they heard of his success with the young man and his work in the greater epilepsy community, they approached him about treating Mark. Mark has been a patient of Dr. Millett’s since 2018.

“To have the opportunity to work with Dr. Millett has changed our lives,” Tom said. The Anderson family praises Dr. Millett’s willingness to try the latest therapies. After two years optimizing Mark’s anti-seizure medications, Dr. Millett decided it was time to try a new one. Shortly after starting the new medication XCOPRI®, Mark’s been nearly seizure-free. And to everyone’s surprise, he’s had no side effects.

“That’s what’s so great about being at a place like Hoag,” Liz said. “You get to try new things that maybe wouldn’t be available at other hospitals.” Hoag is a Level 4 Epilepsy Center, the highest possible rating, and with the support of philanthropy, offers the latest therapies and the best clinical experts.

Dr. Millett said that while other patients have had success with the XCOPRI® medication, none have been as successful as Mark. While some patients experience a short period of seizure reduction, Mark’s response has thankfully been an enduring one. “It is so encouraging to see Mark’s amazing progress. It demonstrates the transformative impact of new therapies for managing epileptic seizures and optimizing quality of life,” he said.

The second blessing for the Anderson family is DeeDee, a 3-year-old Labrador retriever trained to detect oncoming seizures. DeeDee came to the family through Little Angels Service Dogs, a nonprofit organization that partners service dogs with people with various disabilities.

“DeeDee can smell the seizure as much as 35 minutes ahead of time and alert you,” Mark said. By placing a paw on Mark’s thigh, he knows that a seizure is coming and that he needs to get himself to a safe place. She then alerts Tom and Liz by touching a device that rings to different phone numbers. DeeDee will also get her service dog vest, if she’s not already wearing it, which contains a drug to stop seizure clusters, and stay with Mark.

Mark has gained some independence and much more confidence. The condition that he once 21 “It is encouraging to see Mark’s results, especially knowing that it is drastically improving his quality of life.” did not speak of is now at the center of the conversation. “Now that he has the dog, he has to be very public about it, and he has embraced that. He wants to share that and to share awareness and the message of never giving up hope,” Liz said.

The Anderson family is grateful to the Pickup Family Neurosciences Institute and Dr. Millett for not only their care but also their involvement in the greater epilepsy community. It was at an annual Epilepsy Awareness Day event, where Dr. Millett and other members of the Hoag Epilepsy Program were speaking, where they met the service dog organization that brought them DeeDee. “Our message to others is to keep hope alive,” Liz said. “There’s always something new to try that may help.”