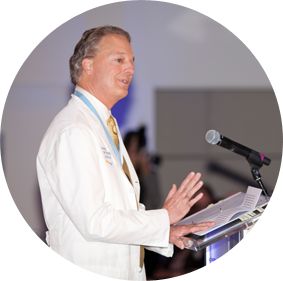 An endowed chair investiture ceremony took place in October 2015 to recognize the appointments of Jeffrey S. Yoshida, M.D., and James T. Caillouette, M.D., as well as honor the transformational donors Carmela and Benjamin Du and Joan and Andy Fimiano.

More than 100 Hoag physicians participated in a traditional White Coat Processional in honor of the formal ceremony. During his remarks, Andy Fimiano quipped, “With all these ‘White Coats’ in the room,  my blood pressure just went up 20 points.”

Dr. Caillouette was named the Joan & Andy Fimiano Endowed Chair in Orthopedic Surgery. The gift from Andy and Joan Fimiano recognized and honored Dr. Caillouette for his work in health care economics and reform, along with the design of next-generation hip and knee implants. The gift will enable Dr. Caillouette, chief strategy officer of Hoag Orthopedic Institute, to expand outreach, education, research, recruitment and treatment through Hoag’s Orthopedic Education & Research Institute.

Visibly moved by the honor, Dr. Caillouette recollected how the culture of innovation not only impacted his 28-year career at the hospital, but also saved the life of his son. In closing, he quoted Samuel Beckett, “Let us do something, while we have the chance.”

Dr. Yoshida was named the Benjamin & Carmela Du Endowed Chair in Urologic Oncology, made possible by the Dus’ $2.25 million gift. As program director of urologic oncology at Hoag Family Cancer Institute, Dr. Yoshida plays a key role in the growth of site-specific programs for urologic malignancies, which include prostate, kidney, bladder and testicular cancers. He also is an expert in robotic surgery and has performed more than 1,900 surgeries to date. Following the ceremony, his parents, Naomi and Matt, embraced and thanked Ben and Carmela Du.

“We are honored to recognize Dr. Caillouette and Dr. Yoshida as the newest endowed chairs at Hoag,” said Flynn A. Andrizzi, Ph.D., president of Hoag Hospital Foundation. “Thanks to the commitment, determination, and the collective power of wonderful donors like the Fimianos and Dus, we can continue to provide the highest quality health care to the communities we serve.”

The ceremony also celebrated Melvin J. Silverstein, M.D., F.A.C.S., holder of the Gross Family Foundation Endowed Chair in Oncoplastic Breast Surgery which was previously announced and awarded. Dr. Silverstein shared that Hoag fellows who have trained with him have gone on to prestigious institutions like Johns Hopkins and the Cleveland Clinic.