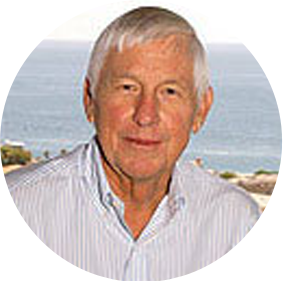 As philanthropists go, Ron Livingston is about as unassuming as they come.

After being treated at Hoag for a heart attack in 1994, Livingston became familiar with the hospital and Hoag Heart and Vascular Institute, and believes its outstanding reputation is well deserved.

"I've had wonderful care at Hoag and that's why I got involved," explained Livingston. "Sandy and I give to many charities, but Hoag is the main focus of our support - I guess it is based on our experience there with my heart attack, and the reputation Hoag has established.

"Through the years, Livingston's involvement with the hospital grew steadily. Four years ago, he volunteered his time for the Foundation Board of Directors.

"Mike McKee is a friend of mine, and suggested I join the board. I was tickled to death to get involved," recalled Livingston.Now that he has become engrained in the Hoag family, Livingston looks forward to Hoag's continued progress, and shows confidence in the organization reaching its goals in the years ahead.

"Hoag certainly has the capability of becoming a world-class hospital, especially with the new CEO, Dr. Afable," asserted Livingston. "I think he's very capable of bringing in world-class physicians to make that happen."

"I guess it comes down to Hoag being the best, and the public recognizing that," said Livingston. "We need to get the message out to the public that Hoag has the ability to take care of you here, and there's no reason to go anywhere else. The more people have positive experiences at Hoag, and then share that information with their friends – that's what will get us there."Livingston speaks from a wealth of experience. His keen business sense comes from a lengthy career in the home-building industry, having co-owned a company that built single-family homes for over three decades."This was a great time of growth for many Southern California neighborhoods, and we built affordable homes for thousands of families," Livingston explained.

"I guess I could look back on that now and see how we helped both families and communities grow. We always stressed fairness with our employees and a quality product."This humble approach was not only instilled in employees, but carried out by the owners themselves.

"My business partner and I always had the philosophy to keep things simple and low key - enjoy our families, work hard, be successful, not be the biggest but the wisest, and good things will happen."

This philosophy was instilled upon Livingston during his college years. Having gained his education at UCLA, Livingston believes one of his greatest "teachers" was the legendary basketball coach John Wooden.

"I was a small guard, and Coach Wooden always wanted a small guard on the floor. I was lucky enough to be that player for three years. This was prior to the glory days, but Coach Wooden taught us all great lessons for our lives after college," explained Livingston."

I learned to do my best, play hard and win, lose or draw, keep my head up high and know that I've done my best," recalled Livingston. "I guess that's kind of a good philosophy in business and in life."

With this balanced perspective - both on business and on life - Livingston seems to have a good understanding of the cornerstone of success. As far as he is concerned, it is a focus on dedication and hard work that leads to achievement. And it is this business philosophy that will also lead Hoag to making its mark on the nation's health care industry.

"My wife Sandy and I have been blessed with two children and five grandchildren," added Livingston. "We enjoy our community and giving back through Hoag just makes good sense.

"As for the mark Livingston would like to make: "I'm not really big on leaving a legacy. I certainly would like to see Hoag get to world-class status, which isn't really a legacy on my part, but it's something that would be nice to be a very small part of helping to develop."