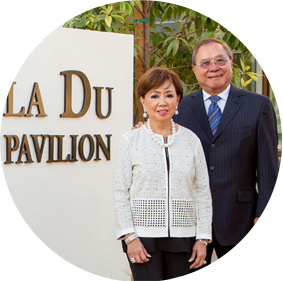 A Legacy of Generosity

Ben Du remembers the day in August when he toured the final phase of construction of the newly expanded and enhanced Emergency Department at Hoag Hospital Irvine. As a member of the Hoag Hospital Foundation Board of Directors, Ben was invited on the tour to update him and his fellow board members on this important Hoag project.

“I saw a state-of-the-art emergency facility and I thought it was very good for the area,” he says. He knew that with the continued growth of the region, which is home to more than 15,000 businesses, there is an immediate need for Hoag to grow with the communities it serves.

Although he and wife Carmela call Newport Beach home, Ben wanted to be part of the effort to bring the finest emergency services and facilities to the Irvine and South County communities. Ben brought Carmela back to Hoag Hospital Irvine for a tour.

When she saw the beautiful 13,500 square-foot-facility expansion and learned of the best practices that ensure the highest level of compassionate care, Carmela was on board with the idea to make a generous gift in support of the Emergency Department renovation and expansion project.

Growing up in the Philippines, Carmela remembers her family giving to the church. When she and Ben first immigrated to the U.S. in 1967, she never imagined that they would have the privilege to give as generously as they have over the years.

In 1976, Ben founded Flojet Corporation, a leading manufacturer of positive displacement pumps and other electro-mechanical components with facilities in Irvine, England and China. Carmela managed the office while raising their daughter, Lizette.

As the business grew, Ben became a respected leader in the business world and together they became generous donors to Hoag. Upon selling Flojet, Ben and Carmela traveled the world, filling their home with beautiful art, furnishings and collectibles—all with interesting stories about how they found them.

Drawn to making gifts with a big impact on patient care, the Dus are thrilled that their giving will affect generations to come. “We’re very excited to make this a reality,” Ben says. “After learning all that they have planned, we know that Irvine residents will have access to outstanding care and an advanced facility.”

When they told Lizette and their two granddaughters the news, the entire family was excited by the couple’s decision to support Hoag. “Lizette smiled because she understands the importance of giving back,” Carmela says. “It will be part of our family legacy.”

Marcy Brown, senior vice president, Hoag Hospital Irvine & Ambulatory Services, expresses the gratitude felt by the Hoag Irvine team for the Du’s generosity. “What the Dus have done is tremendous and will help us transform health care in our growing community through improved patient experience in the emergent care setting.”

With a patient-centered design, the Benjamin & Carmela Du Emergency Pavilion will provide exceptional emergency care for our community now and for future generations. “On behalf of the countless patients we will serve in the years to come, I thank Ben and Carmela Du for their giving spirits,” says Robert T. Braithwaite, Hoag president and CEO. “By providing the funding to enhance the Emergency Department experience for all concerned, their giving is truly a win-win for Hoag and the community at large.”